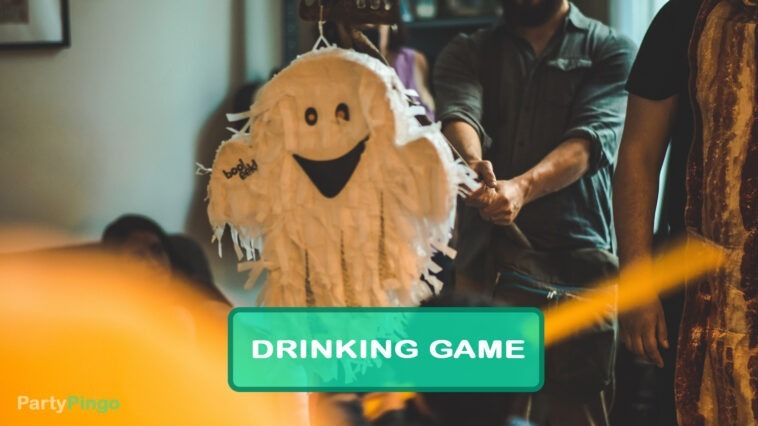 When it comes to throwing a party, Halloween is up there with the greatest of them. It’s so good that some people compare it to Christmas. It’s a great opportunity to let loose and enjoy yourself without feeling guilty, as well as an occasion to dress up in ridiculous costumes. Moreover, a Halloween party wouldn’t be complete without a few boozy drinking games. Here are some drinking games for Halloween.

As for what to wear for Halloween, there are some certain bets: a witch’s cap, a broom, a cat, eerie makeup, attempting to seem like the zombie, etc. As additional people show up to your party, you may keep playing this game. If someone shows up dressed as a witch, vampire, or zombie, or carrying an item associated with Halloween, everyone in the room except the person who saw the outfit must take a drink simultaneously. When the bell chimes, everyone in the room, even the one who noticed it, must take a drink.

Have everyone gather round a table and hand out cards to each person. There is a letter inscribed on one side of each card, such as “D” for “detective,” “M” for “murderer,” and “V” for “victim” (victim). Only one M card and one D card are permitted. The murderer’s identity must be determined by whomever receives the detective card. With a knowing nod, the killer ensures that its victims meet a spectacular end, and as they do, everyone chugs a beverage. There are two possible outcomes: either everyone dies or the detective figures out who did it. The killer, on their part, has to identify the detective in order to save their life. They have to drink three times if they accidentally murder the detective.

The first of our Halloween-themed alcoholic beverage parlor games is a twist on a classic card game. The standard variant has players conceal their cards beneath a beer can in the center of the table. If you take a card from this stack, you have to do this. Each participant contributes a portion of their beverage to a plastic pumpkin sitting in the middle of the table. Pass around the cards, and have each player reveal their hand in turn; if anybody reveals a 6, 10, Jack, Queen, King, or Ace, they must all drink from the pumpkin.

It’s time for some boozy team-building activities at the Halloween party! You and your pals will need to supply a lot of toilet paper and split up into small groups of twos or threes to play this game. After everyone on a team has been handed a toilet paper roll, they take turns deciding who will be the mother and who will handle the wrapping. Then, on Go!, the competition to see who can cover their mummy from root to tip the quickest begins. The losing team, who are the slowest, must all consume their beverages at once.

This unique take on traditional Halloween party drinking games requires participants to first prepare their drink while racing against the time before downing it. Prepare a bar with a variety of liquors (vodka, rum, etc.), mixers (Cola, soda, fruit juices, etc.), and garnishes (fruit slices, leaves). Place players who are actively participating each round across from those who are not, and give everyone Five minutes to make the most spectacular cocktail ever. At the end of the five minutes, have everyone try each drink and cast their choice for the one they liked best.

Forget the ping pong and the bed linens; it’s time to get up and dance. Everyone sits in a circle and chooses a Halloween character to portray, along with a hand signal to indicate which role they will be playing. As a zombie, for instance, they may make a sweeping motion with both arms or bob their head from side to side. A phantom may do a full-body jiggle. Cats’ paws are so sharp because they use them as claws. Then have them do the “We Will Rock You” thigh-slapping and clapping dance. The player who has been designated as starter maintains the rhythm and joins in with another player’s gesture. The zombie slap and the witch slap are two such examples. If you’re going to use the witch hand motion, you get to go first. If someone screws up a signal, they have to drink, and if someone messes up the rhythm, they all have to drink.

In order to play this game, you must dig down a copy of Michael Jackson’s “Thriller” (the game’s title track) and play it at maximum volume. Everyone dancers around a tabletop to the rhythm of the song, and afterwards, when it stops, they all take a swig from the cup next to them and overturn it. Whoever’s cup is successfully flipped last loses. After then, the music starts back up, and whomever has made it thus far in the most number of rounds wins.

This is the best option if you’re looking for a simple yet entertaining Halloween drinking game to play with your friends. Put some eyes on some white ping pong balls using a Sharpie. Take these balls and play a game of beer pong after you’re done. Red punch, rather than the more traditional beer, will help set the mood for Halloween.

You and your pals will require a huge white bedsheet (also known as the Ghost), and you should form teams of even numbers, with each team holding opposing ends of the sheet. Each team has one goal: move the ping pong ball to the other team’s side of the sheet. When this happens, all of the opposing team members must take a drink. If the ball drops off the sheet, everyone has to drink. After five rounds of play, the losing team is eliminated. This is not your standard fare for boozy fun at a Halloween party, but it sure is a lot of spooky good times!

Is there a list anywhere of entertaining Halloween drinking games that need understanding of Halloween/horror pop culture rather than just the holiday itself? This Halloween-themed drinking game pits players against the time as they show off their spelling, humor, and nerdiness. The game begins with the first player giving the entire name of a person (real or fictional) associated with Halloween, frightening stories, or the spooky season. Each player has 10 seconds to yell out a name starting with the same letter as the player on their left. For instance, if I were to say “Buffy Summers” (from “Buffy the Vampire Slayer”), the next name I may say might be “Boris Karloff” (from “The Bride of Frankenstein”). Also acceptable are one-word names like Leatherface. When a person is at a loss for words, they often go for a beverage. If no one can remember the name, anybody who yells out the right one must drink. Another player may then yell out a name, and the player on their left must continue the chain.

This is a trick-or-treating version of the standard Never Have I Ever game, and it’s a great way to test your mental agility on Halloween. Gather everyone around in a circle and have the first person start by making a statement that begins with “I’ve never.” One example would be “I’ve never been on a motorcycle,” and the rest of the players would have to guess the rest of the statement. If anybody at the table has ridden a motorcycle, everyone must drink; if no one has, the person making the assertion must drink. You win the game if you can come up with a sentence that makes everyone chug a beverage at the same moment.

Last but not least on our list of enjoyable Halloween drinking activities is getting everyone up and moving to a playlist of scary tunes. At random intervals throughout the dance, shout out words like “ghost,” “pumpkin,” and “zombie.” As soon as someone mentions this item, everyone must do it; whomever responds last must drink. Make it really challenging in order to throw them off and increase the number of drinks consumed.